Balandžio 20, 2022
The situation is grimmer than you think | Ukrainians ask the world not to forget them 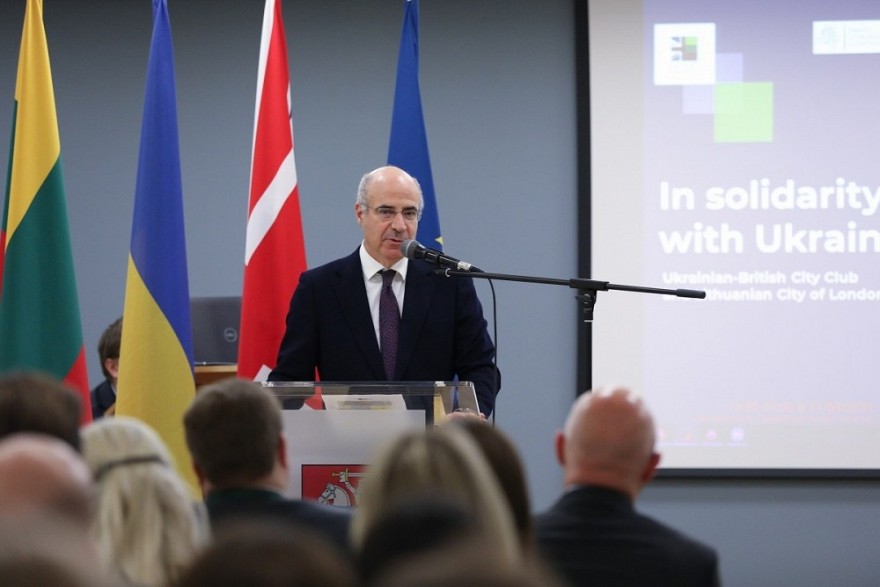 Earlier this month, Ukrainians, Poles, British and Lithuanians gathered in solidarity with Ukraine at the Embassy of Lithuania in London. Many concerns and ideas were discussed at the event hosted by the Lithuanian City of London Club (LCLC). Among the speakers were renowned British journalist Edward Lucas; the Ukrainian ambassador Vadym Prystaiko, London-based international arbitrator and president of the Ukrainian-British City Club Irina Tymczyszyn; the Permanent Representative of Lithuania to the EU Arnoldas Pranckevicius;  and financier and anti-corruption activist Bill Browder, the founder and CEO of Hermitage Capital Management and author of Red Notice.

The Lithuanian Ambassador, Renatas Norkus, opened the evening. “We will make history by supporting Ukraine as much as possible,” said Norkus. “Things are not yet going in the right direction. Putin has decided to break international law and international order. All of us are defending that order. Ukrainians are defending all of our freedom.”

The Ukrainian Ambassador, Vadym Prystaiko, highlighted that the Ukrainians have long had close ties with Lithuanians: there is a long history of coexistence, cooperation and friendship between the two countries. “We were especially proud and a bit envious when Lithuania joined the global international community of the EU and NATO, something we weren’t able to do after the collapse of the Soviet Union. We are now facing all these challenges, but we are not alone. We have so many supporters worldwide who understand what is happening. We are working together to get Ukraine back,” Prystaiko said. 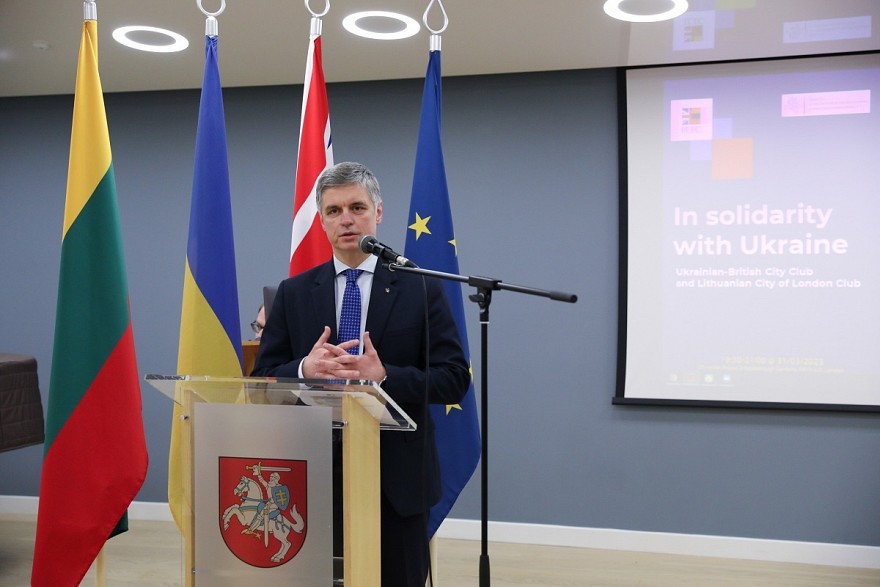 In other remarks, Prystaiko again stressed that Ukraine needs urgent support: military, political, financial, medical and not least, humanitarian aid. “And we need sanctions and pressure on those companies still doing business with Russia and supporting the war machine,” he added. “Through our combined efforts, we hope to bring this war to an end and to put the aggressor in his place. Russia can still join civilized society if it stops killing its so-called brothers and sisters and lets all of us re-think our ideas of friendly cooperation.”

Ukraine-British City Club president, Irina Tymczyszyn, expressed her gratitude to the Lithuanian, Polish and worldwide communities for their tremendous support. “It’s very emotional; it’s very difficult. It hasn’t sunk in yet. But it’s happening, and we need to address it.”

Tymczyszyn spoke about the Rule of Law and Fundamental mistake(s) of the West in fighting this war. She has also urged everyone to wake up, face Russia’s social realities and adjust our expectations. “Almost exactly eight years ago, just after Crimea was annexed, I said it wasn’t a civil war in Ukraine. Instead, it was the beginning of the Third World War. I repeat it today. Some think this isn’t the case - but it is. It may not have reached London in the same way as Ukraine; no bombs are falling on the buildings of this city yet. However, if Putin is not stopped, it will happen. We must win the war and stop Russia so it won’t happen again,” she said.

According to Irina, Putin does not play by the rules. He respects neither The Rule of Law nor the rule of war. There is ample evidence of murders and shootings of civilians and to bring Putin to justice, one must win this war. 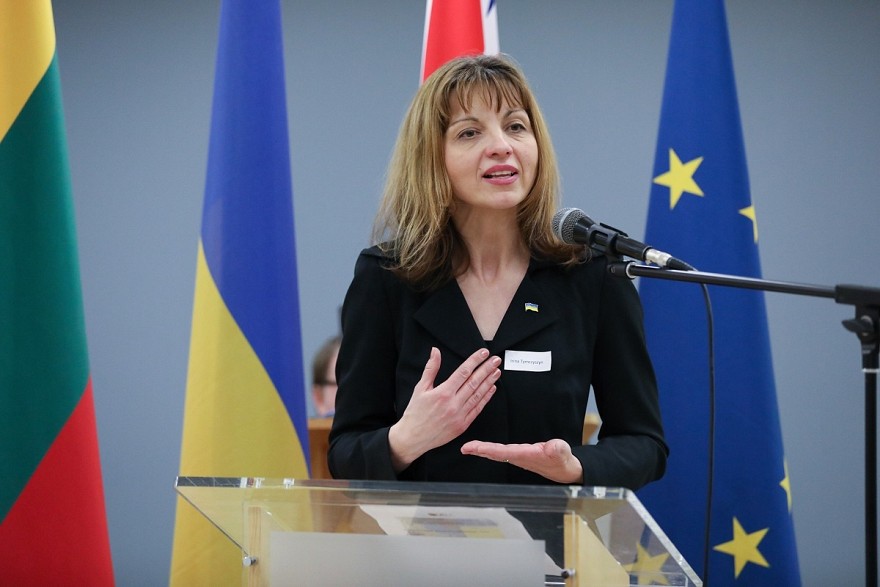 Another fundamental mistake pointed out by Tymczyszyn is that people think Putin is alone responsible for the war. Russians, however, largely support their President. “Since the invasion, I have spoken to many educated, very intelligent Russians. They believe that Putin is right even when they know what’s going on in Ukraine. They genuinely believe that Ukraine should not exist as an independent state. It is crucial to understand that we must also win the information war and ensure that the people who receive information understand the atrocity.”

“There is no legal mechanism for dealing with Putin. He is not playing by the rules while everyone else is, and he thinks no one will punish him for it. Although sanctions are very important, they are not enough. The situation is grimmer than we think. After the month of war, I am concerned that the world’s attention started to decline. That is what Putin expected. Ukraine will keep fighting, and the countries of the world and Europe must remember that and continue to support us.”

Former senior editor of The Economist, Edward Lucas, began his speech by apologizing on behalf of the West. “We were ignorant, we were arrogant, we were timid, we were greedy. And the result of that has been that we have no good options left now. The price is now being paid by millions of Ukrainians.”

Aside from the tremendous consequences of this awful catastrophe, which will impact the world for decades to come, Lucas finds it most annoying that it did not come as a surprise to those who were paying attention.

“I was in a meeting in 1991 with German, British, European, and American officials. People from Lithuania, Latvia, Estonia, Ukraine, Poland, and other countries warned the westerners about what was happening”. 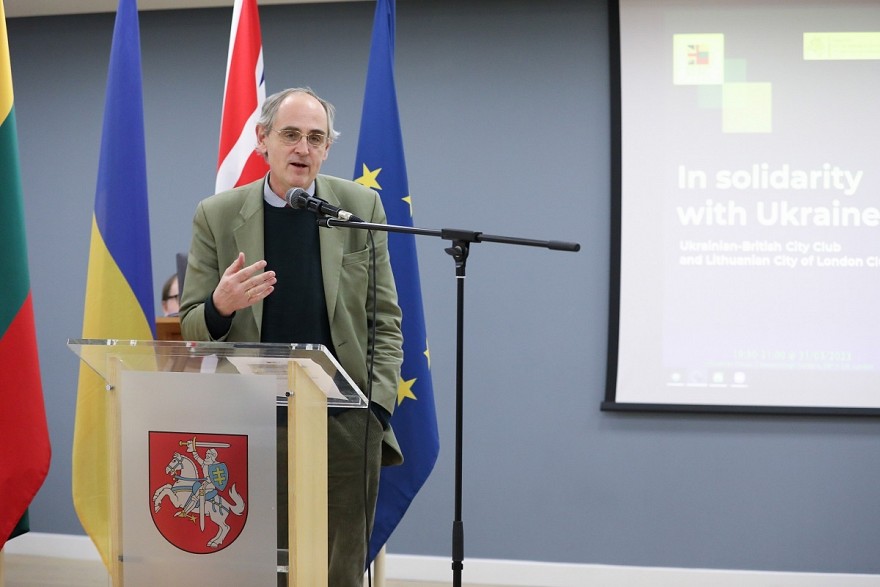 He added “Even after the collapse of communism, Russia and Soviet imperialism continued to exist. The neighboring countries were always concerned about Russia. Western countries have responded in ways that are comfortable for them. We didn’t want to rock the boat; we didn’t want to damage very important trade and investment relationships with Russia.”

Bill Browder, a financier and anti-corruption activist, founder and CEO of Hermitage Capital Management, and author of Red Notice, has repeatedly warned the West about Vladimir Putin.  “While we all argue what yachts to seize and which oligarchs to sanction, Europe spends between half a billion and a billion dollars a day on Russian oil and gas every day,” Browder told the audience at the Lithuanian Embassy.

“We are talking about the economic blockade of Russia and at the same time sending between half a billion and a billion dollars a day to buy equipment to kill Ukrainians. That’s got to stop,” said he. “Ukrainians is just a first stop. If Putin wins in Ukraine, he will be entering the Estonian or Lithuanian border and fighting with NATO, pointing his nuclear weapons into Washington, Berlin and London. It’s time we stop buying Russian oil and gas.”

Browder believes that will hit Russia harder than anything else. “It is possible to win this war if he’s no longer has the money to execute the war. If we give Ukrainians the tools, they need to fight the war, and if Ukrainians continue fighting, I think defeat is possible. Because the alternative is too hard even to imagine.”

Ginta Budriunaite, president of the LCLC, explained why the Lithuanian community responded so vocally and united to this war. “Lithuanians, Poles, and other Northern nations share many similarities that bring countries together: a similar culture, a shared history, a common political and economic landscape, and we are all against oppression of any kind.” 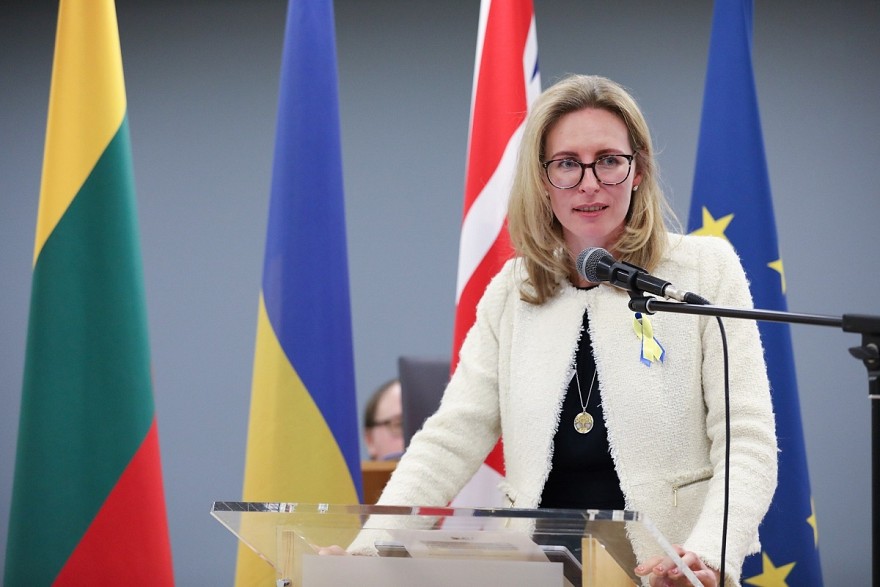 “Lithuanians carry a generational trauma that wakes up like a wild animal when countries like Ukraine are threatened or attacked.”