Vasario 11, 2019
Have you ever stepped inside the painting? UK audiences are to be treated to a unique fusion of Lithuanian classical music, art and digital technology To celebrate 101 years since the restoration of Lithuania’s statehood on the 16 February 2019, the premiere will be held in Birmingham, bringing together Lithuanian classical music, art and digital technology.

Conducted by one of the greatest living conductors Mirga Gražinytė-Tyla, City of Birmingham Symphony Orchestra (CBSO) concert will feature the symphonic poem The Sea by the most prominent Lithuanian artist of the 20th century Mikalojus Konstantinas Čiurlionis. In the Symphony Hall foyer the audience will be able to experience an immersive virtual reality (VR) animation Trail of Angels. Directed by Lithuanian film director, screenwriter and editor Kristina Buožytė and visual effects producer Vitalijus Žukas, it premiered in the 75th Venice international film festival.

During VR experience viewers will be transported to a mysterious world inspired by M.K. Čiurlionis paintings and music. The surroundings react to the viewer’s gaze, bringing it closer to the original experience of viewing the paintings. It took more than two years to create this virtual reality animation project, using elements from 60 paintings.

Stephen Maddock OBE, Chief Executive of the City of Birmingham Symphony Orchestra commented: "Combining digital technologies with classical music and art can be a very powerful way of different art forms illuminating each other – visual images can add to the understanding of even the most abstract music, and music can bring images to life (as it has for more than a century in the film industry)." 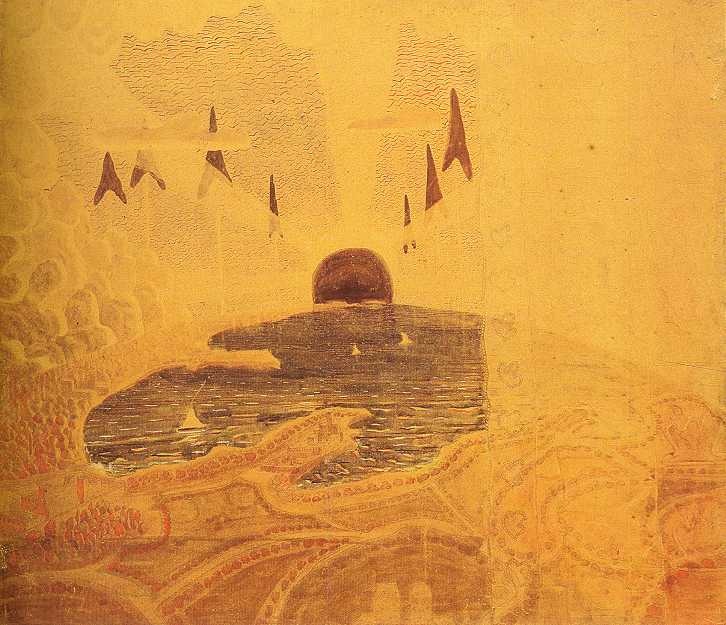 K. Buožytė said, "Čiurlionis was a forerunner of multimedia and combined different types of art to create a unique universe. Every picture of Čiurlionis is like a window into the mysterious mind of the artist. Virtual reality allows you to enter the world of this unique artist". Artist and composer M.K. Čiurlionis is a unique figure in the history of European arts and can be seen as a truly Renaissance individual. He has been considered one of the pioneers of abstracts art in Europe. Over a short, mere decade-long career, he composed nearly 400 musical compositions. During those same brief years, he also created hundreds of paintings and etchings, as well as several literary works and poems.

Justė Kostikovaitė, Lithuanian Cultural Attaché in the UK said, "It's a dream come true to introduce Lithuania’s M.K. Čiurlionis to a foreign audience. In the absence of a contemporary documentary film about the most famous Lithuanian artist, we are able to tell about Čiurlionis' creative path through virtual dimension".

Stephen Maddock OBE added: "It’s true that Čiurlionis is not that well known outside Lithuania – but I am sure that this will continue to change with the passionate advocacy of artists such as Mirga and Normal Perryman.  The music is very fine, and having heard Miske (In the Forest) last year I can testify to its great beauty and colorful sense of mystery".